I do still have to work today, tomorrow, and Wednesday, but I image it'll be fairly slow since I bet many of our clients will also be slow and / or have shut down their offices for one or more days. Which is good because I have a couple of projects to work on. I had a really good weekend though--

As I mentioned Friday, I went to a Stars game. The antics to get there as early as possible were Keystone Cop-worthy, but DD and I made it in time to score a pair of tickets to a game in January that I don't already have (partial-season) tickets to, so YAY! Also, the Stars won against a really good team in which there was only one goal--ours in overtime--and three fights and a ton of penalty minutes during regulation play. They also won Sunday afternoon's game which I did not attend as it was in New York. :0)

While watching Sunday's game on TV, I wrapped what Christmas presents I have and placed them under my new tree with colored lights. 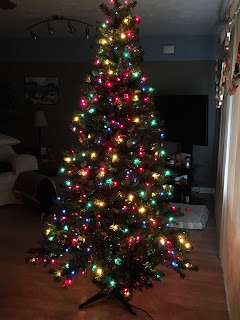 At this point, the poor tree only has two ornaments and only because one never got put away last year and I came across it in a drawer when I was looking for something else and the other is an ornament I made for Sonshine a few years ago and kept hanging in my office for some reason.

I didn't make the trek out to the shed this weekend to find the rest, but that'll happen sometime between now and next Monday.

What I did do this weekend was load up all those "things" I've been clearing out the house and staging in the garage into the car and take them to a local donation spot. Man--that felt really good. 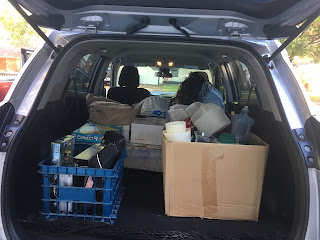 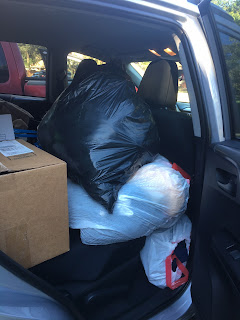 Getting rid of stuff is rather addicting. One hallway closet is pretty much purged now. Remember I said I'd gone green and was using tote bags now instead of plastic store bags? Yeah, I went through the rest of the tote bags I had--(I'm a tote bag ho.)--and picked out the best ones for holding groceries and, with three exceptions, got rid of the rest of them since I can only use so many tote bags and have my favorites. The other hall closet needs to be culled still, but, honestly, there isn't much left in there either.

Lunch on Saturday with my dear friend, N, was delightful as usual. And she made me this--which was perfect even though she didn't know about the hockey tree when she chose designed the pattern... 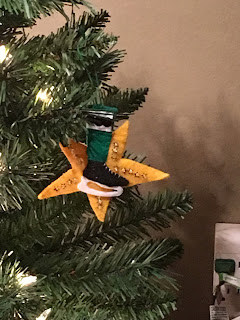 I also got to visit with DH's family on Saturday and specifically with that family member with the medical issues and she's better. There's a ways to go and hurdles to surmount, but she's better. If you're the praying sort, please lift her up.