I'm planning to go back next year. Absolutely. The whole thing was super fun. Panels or break out sessions started at 10am and went generally to 10 or 11 at night. There were also a couple of groups that rented suites and offered alternative events as well as just a place to go for a break if needed. 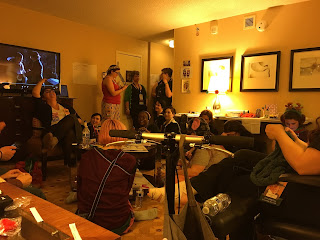 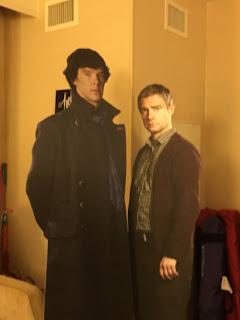 Panels ranged from discussing all incarnations of Sherlock Holmes since Arthur Conan Doyle collectively to discussing individual versions such as CBS's Elementary. There were a ton of writing workshops, which I loved. There was a panel for folks to share how/when they came to fandom in general and Sherlock specifically. Other panels included how to pod cast, discussions of plays that various actors perform in between seasons of Sherlock, a London Travel Guide, and book club type discussions with authors who have written pastiches.

In addition, David Nellist who plays Mike Stamford in the BBC's Sherlock, was a special guest. He's very charming. 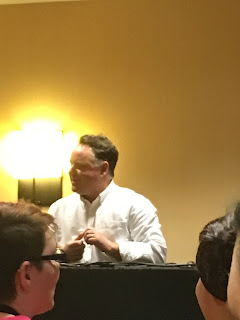 And if all of that wasn't enough, more people than not were in costume. Most of it Sherlock Holmes related, somehow or another, but not all. 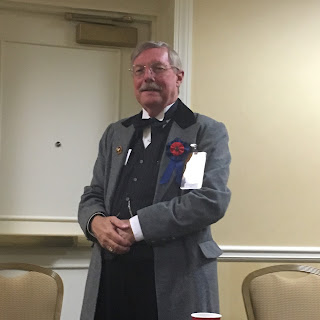 This nice man is a lawyer in real life and was dressed as a Victorian gentleman,
although I'm not sure if his intent was to be either Holmes or Watson. 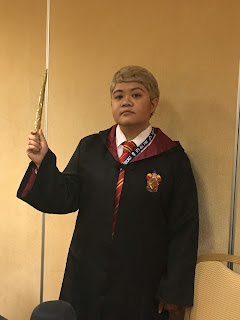 This lovely young lady was as John Watson as a Hogwarts student. Yes--there's crossover cosplay!

I thought about taking a costume, but it was my first con and I wasn't sure what to expect, so I just took my Sherlock-related t-shirts and left it at that. I bought two (maybe three) new tees while I was there. Next year I may go for a costume, although I have no idea at this point what it might be... But I have plenty of time to come up with something.

I didn't take many pictures, honestly. I was too busy soaking up the atmosphere and enjoying myself.

Ever been to a non-work con? Did you love it? What was it?