I may have to start watching NASCAR again. :) If you've known me for very long, you'll know I went through a stint where I loved NASCAR. I watched it on Sundays, I discussed the races with people, I had driver stickers on my car, and I still have my fair share of collectibles. DH and I even attended two races; one here in Texas at Texas Motor Speedway and one in Arizona at the Phoenix International Raceway. 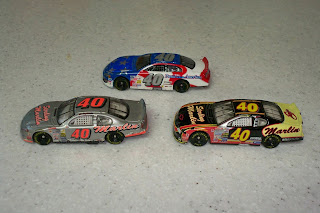 My favorite driver, back in the day, was Sterling Marlin.
I was NOT a Jeff Gordon fan.

One thing we learned about race tracks was that they have their own personalities, if you will. Texas Motor Speedway was a total party track. We could hardly get to sleep for all the noise and chatter and laughter going on late into the night. For our trip to Phoenix, we bought a pop-up trailer. A good choice, though not because of any sort of noise. In fact, PIR was the complete opposite of TMS. This was the rich/old person's track--they all had motor homes! And it was quiet as heck in the camping area.

The reason I may have to take up NASCAR again is because, for the first time ever, a woman will start the Daytona 500 from the pole position (that's first in the line-up, on the inside nearest nearest the flag pole if there are two lines). Last Sunday, Danica Patrick drove the fastest qualifying lap, giving her the pole.

It's hard enough to win a race even if you're a man, and there are or have been scant few women in the sport, though it's one of the few were gender really isn't an issue in terms of needing brawn over brains. You need endurance, a good engine, and a lot of luck.

I'm not really a women's libber, but it's good to see Danica taking a giant leap for woman-kind and showing girls and young women that with a lot of hard work and perseverance, you really can do anything you want in this world. 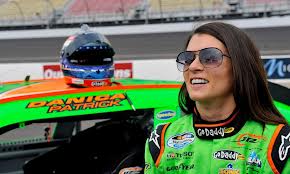 (borrowed from autoweek.com)
Are you a fan of auto-racing? Any particular kind?

I know nothing about NASCAR, but I'm always glad to see women excelling in sports of all kinds. Go Danica!

I've never watched NASCAR, but I hope Danica does well!

Rally racing. All wheel drive. Rain, shine or snow. Through cities, towns, fields, and woods, on roads that resemble nothing so much as a dirt track that Robin Hood might've stopped some unwary traveler on. At speeds that are at least 5-6 times too fast considering the terrain. Steep hills and drops, ninety degree turns, "S" turns, roads lined with trees, boulders, and brave (or foolish) fans. I'd love to go see one in person, even though I'd only see a split second of each car as they whooshed past. Very few women in this sport, too, at least as drivers; there are a few more co-drivers (they go so fast on these roads that they need a co-driver to call out what their next move should be--totally cool). Think of Podracing, without the give of having horizontal leeway. :D

I actually plan on writing a story one day with a rally driver hero (sometime after Quantum Kiss and the sequels the new characters are demanding).