Oh, my, yes--I'm ready for the long weekend.

The band was awesome. According the band director, this is the earliest the kids have really known their competition music and their routine this early in quite a few years. Lots of other people had lots of good things to say, too. Even the district's head guy over all fine arts said they were great!

We had a couple of kids who were really *really* nervous, one having a mild panic attack before taking the field. Another young was just so down afterwards because he messed up. But he's a freshman and it was his first time on a football field in front of a major crowd.

But bad me--the one thing I forgot was my camera and my phone does not take videos. And even if it did, I have no idea haw to get them from phone to Internet...

From last week's performance for the parents, Sonshine "assuming the position of attention"--also being in JROTC, he tends to take it to the next level. (They are not required by the band director to salute, nor do other band/JROTC members salute, but my son . . . *rolls eyes*)

Also--one of three BAND MEMBER(s) OF THE WEEK!!! 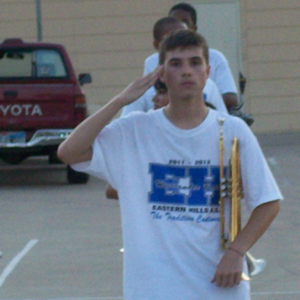