As you know, DH and I own our own business. We utilize a very complicated application to manage clients, our schedules, time entries--pretty much everything that happens is supposed to happen or be tracked in that software.

It also has a feature that allows you to plan large projects. You can break projects into phases and then create tasks/tickets for various steps of each phase.

Anyway, I've been less than diligent about most self-publishing related tasks. At least in terms of maintaining and refreshing previously released books. Other things too, such as better planning and plotting. But not things like advertising or promotion. I do very little of that by choice, although there are some things I do do and other I should do. I'm not getting to the level of several writers I know because that's just not me or part of my plan.

But we've been talking a lot in the day job about utilizing the application to more of its fullest, about following procedures, about creating project plans to stay on track, and the subsequent tasks/tickets in order to not only schedule them, but keep track of the time worked on them.

In addition to that, I have online friends with whom I hang out pretty much every day. A couple of them are full-time writers and they talk often about planning out various aspects of being said full-time writers that aren't the actual writing. Newsletters and blog posts and admin stuff. They plan that stuff, put it on their calendars.

So between the two conversations, I keep thinking that I need to be a little more proactive about things and sooooo...it's my intention and hope that I can make those plans in advance. If that's the case, I might need an application similar to the one at work...

Remember my bullet journal? Yeah, that lasted all of two weeks. The composition book is back to being just a composition book. Sigh. At first I thought a physical book would work better for me, but I've really been leaning in to being virtual and/or going green and reducing my paper usage. Maybe an online/electronic/virtual helper will be better. I did a quick Google search, read some articles with pros and cons. But will have to test some out I guess.

Anyway, it's Friday--hope you have an awesome weekend.

Email ThisBlogThis!Share to TwitterShare to FacebookShare to Pinterest
Labels: being proactive, getting organized, miscellaneous, planning ahead, strategic plan

The gift that keeps on giving... 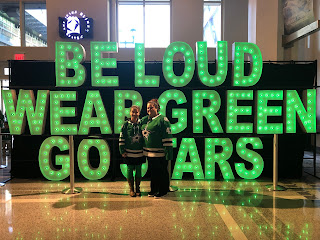 After discussions about cost and whatnot with DH, it was decided that we could be Dallas Stars Season Ticket Holders for at least one more year.

One of the reasons he gave for agreeing is because that's my gift for every holiday I could possibly expect one. And I'm perfectly happy with that. Along with tickets to every home game, there are also other events and perks that come along with being a STH.

One of those is first dibs on playoff tickets. And since we're going to make the playoff this year--that's handy. Another is attending the STH event each year right before the season starts where you can meet & greet the players. There are a couple other goodies you get, too, like last year we ended up with two large Dallas Stars branded cooler bags.

I do have to share--we are using one set as a prize for marketing purposes and one set as an employee perk... But I can't go to all of the games anyway, so it works out.

Have a great rest of your week!

A Night of Romance 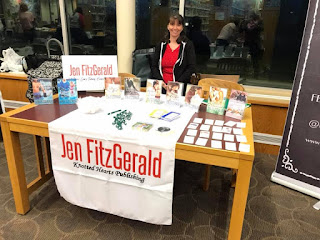 Participating in "A Night of Romance" at a local library for the first time was a lot of fun. Didn't sell any books because I didn't have any, but I learned some things about this event and what to do better for next time.

Namely--have some physical books. I'll try to squeeze that herculean task into my schedule between now and October. It'd be nice to have physical books at my conference as well. I might need a little help from my friends, however, as I didn't do so well the last time I tried get physical books printed. I'm missing a trick somewhere.

I tried creating a matching game of my covers with printable business cards...only no one realized it was a game and wanted to take the cards. So note to self...print up a set of cards for each cover, but have a QR code and the URL to my website on the back instead of my logo. And come up with a more obvious game and have a cool prize, like maybe a free book.

Overall, it was a fun night of hanging out and visiting with author friends as well as meeting library patrons.

On another quick note...my Dallas Stars won their game Saturday evening and the two teams ahead of them in the Central Division standing lost--meaning we moved into second place in our division and into sixth in League (out of 31 teams). Holy smokes!!! And we have the best record in the League since the end of October, until which time we had one of the worst.

Have some more sprinkles... 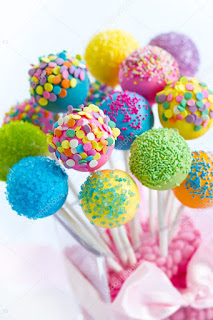 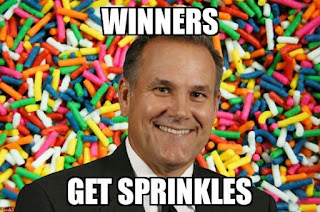 Darryl "Razor" Reaugh -- color commentator for the Dallas Stars
I was originally thinking of some intellectual topic for today's blog post, but after Tuesday's game and then last night's game, I decided my Dallas Stars needed some love. Not only because they won both games, but because it's been a week of really good things, so let's celebrate!
1) Andrew Cogliano played in his 1000th game last night. There are "only" 82 games a year, so this can take a while. Sadly his Iron Man streak (meaning consecutive games played; he got all the way to 830) was broken a couple of years ago due to a suspect penalty call and subsequent suspension.
* On a related note, Cogs is the third Stars player this season to reach the 1000th game milestone.
* On another related note, all three of those players have been with the team for a year or less. Cogs came to us this time last year and the other two were signed over the summer.
* And for those two summer signings, Dallas is only the second team for each of them. They'd played their whole careers and most of those 1000 games with a single team (although not the same team).
2) Jason Robertson played his first NHL game last night and earned his first NHL point with a secondary assist on Tyler Seguin's drought-breaker...
3) Roman Polak played in his 800 game last night.

4) Tyler Seguin finally scored a goal, breaking his career long drought of 17 games. He did it in his home town of Toronto. In front of his parents and tossed the puck to his mom in the crowd.

5) Denis Gurianov, our young rookie sensation, scored his 17th goal last night and is tied for second on the team with another young stud, but only behind our captain who...

7) The Stars have the longest win streak in the Western Conference right now at 3. They are tied for second in the League with a New York team and trail behind the Tampa Bay Lightning who have won 9 straight games.
8) Now this point isn't just this week, but we have the best goalie tandem in the League with Ben Bishop and Anton Khudobin. We made it to the playoffs and to the second round of the playoffs last year because of these two. Three years ago, the team couldn't buy a win streak to save their lives.

Okay, I'm done gushing about my team. But they deserve it.

Have a love-filled Valentine's Day and a wonderful weekend. I'll gush abut tonight's event on Monday.

A Night of Romance


Friday is Valentine's Day and I'll be celebrating romance novels with fellow authors at a local library.

Last year I went to support my chapter mates and friends who were participating. It turned out that almost all the authors participating were or had been members of my writers group at one time or another. This year looks to be the same, but now I'll be among them.

This is my first local event. I'm careful about revealing exactly what I write. Not because I'm ashamed, but because male male romance, much like queerness in general can incite negative reactions and I don't want to put myself into an unsafe position.

But, as all the other participants are people I know, I feel confident they'll have my back should the need arise. So...

There's nothing like a last-minute event to ratchet up my stress-level. My down time this week will be spent pondering and planning my table presentation. I'm pretty sure everyone else had physical books. I don't. Everyone has swag. All I have right now are pens. But I do have cover images in stand-up frames (a trick I learned at the second GRL I attended) along with book blurbs and QR codes. 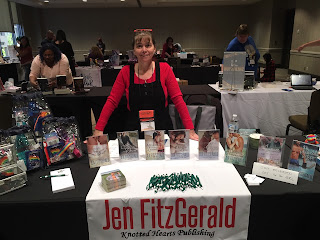 I need to buy some orange Lifesaver mints--these are the bomb and I will never do an event without them at my table/space.

Next week, I'll let you know how it goes.

Have a great rest of your week.
Posted by Jen FitzGerald at 5:57:00 AM No comments: