Since I have no carbs...I need flavor and I got a wild taste for chili. I grew up eating chili with beans and have always made it that way, as one often does with foods from childhood...

However, beans have a lot of carbs, so I searched for alternatives. Google suggested lima beans, which still have a lot of carbs but also have half as many fiber grams. Alas, still too many for me right now. I thought about chick peas aka garbanzo beans, but they have the same problem.

So I thought--I'm in Texas and beanless chili is a thing. But what could I add to add some bulk--as if beef wasn't enough--and I decided on kale. Of course, you have to enjoy kale for this to work, which I do, so I was off to the races. I bought a package of chili seasoning because I'm not good with that kind of thing and instead of plain old diced tomatoes, I bought a can of Ro-tel for an added kick.

This is what I ended up with: 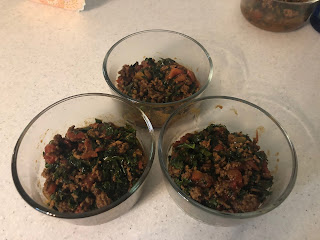 The flavor was great. I enjoyed the kale. I'm not so fond of chunks of tomato, so next time, I'll probably run the Ro-tel through the food chopper a bit. But this ended up a winner of a Keto-friendly recipe and off the cuff too.

The other thing I made this weekend, which probably isn't that original, is Buffalo Chicken Poppers. 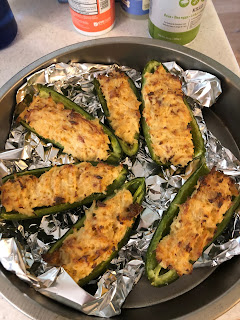 I'd made this Buffalo-flavored cream cheese chicken thing Saturday instead of the BBQ chicken the rest of family ate and it lacked a little something, which I'll have to pick a friends brain about later. It wasn't bad, just a little bland on its own, so I bought jalapenos to stuff and that was also very tasty.

Writing this up is making me hungry! But I still have a couple of hours before I can break my fast for the day, but rest assured, I will be eating one or the other of those items for my morning snack.

Hope you had a great weekend and here's to a productive week.