What better way to end the week with a third win in a row! 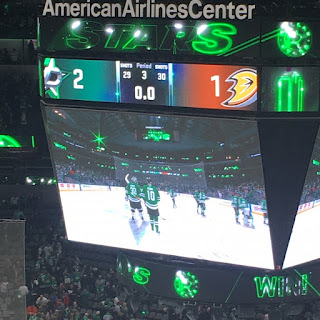 For maybe the first time ever, I attended a Stars game without my daughter--although she was there with other friends. I was there with an author friend from the conference I just attended. While she lives in Pittsburgh, her family is here in the DFW Metroplex and she's a Stars fan.

My friend got a puck from one of our star players, Tyler Seguin, probably for wearing a jersey of his from way back when he played in Europe during one of the NHL's lockouts. That was super cool to see. And now I want to try to solicit a puck from my man, Roman Polak, once he's back on the ice. His sternum was cracked in game one during a collision with the boards, so I've been missing him a lot. And, to be honest, so has the team...

So happy Friday friends. Have a great weekend.