Check off another great experience in this journey of being a hockey fan. Last night DD and I went to our first ever official watching party. While the team is on a road trip, fans are still gathering to watch and cheer.

Last night the watching party was at closer-to-home than usual venue, Texas Live. With a 100' screen and a wicked sound system, it was almost like being there. 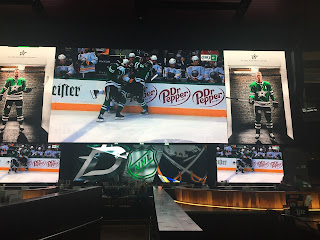 It's hard to really get the scope of that screen, but it's BIG!


The Dallas Stars in arena announcer was there as well, providing many of the same announcements as if at a game--like announcing Dallas's goals when scored. There were also give-aways of tickets to an upcoming game as well as signed stuff. Sadly, neither DD or I won anything, but the experience was so fun.

So much so that we're attending the next one on Thursday. Which is mostly only possible because DD is enjoying spring break, so we're taking advantage.

Hope you're having a great week...as you can tell, I am!!