I've selected a new template. For now. Though I loved the other one, it was time for a facelift, so those of you who visit the blog directly will see some changes as I try out various templates and see what feels right. Bear with me...

What I really wanted to talk about today is hockey. Sort of. DD and I have gone to about fifteen games at this point.

One of the things I enjoy about hockey as a sport and attending games is that the fans actually sing the National Anthem. Across the county. I don't know pro about football or basketball games, but hockey games--yes. 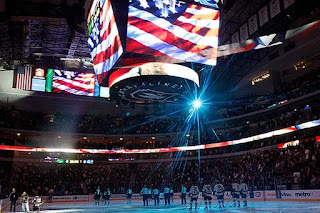 As you can see, a digital rendition of the flag is shown on the jumbo-tron as well as on the digital screens on either end of the arena. A real live American and Canadian flag hang on either side of those "end-cap" digital screens in the American Airlines Center. If the Stars play a team from Canada, both anthems are sung. I do try to sing along to the Canadian anthem too, where I know the words. I think I've mentioned that in Buffalo, both anthems are always sung because they are so close to the border that a significant number of people in attendance are Canadian.

Back when Sonshine was in marching band and we attended Friday night football games--NO ONE sang. I thought it was a shame.

This past Monday, DD and I attended a game we bought tickets for. The game wasn't part of our partial season tickets package, but it was bobble head night and so we bought some cheap tickets and went. Two things that have never happened to us happened at this game. 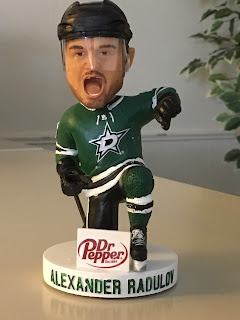 The first was that our section was chosen for the "Dr. Pepper Minute" -- where if Stars scored a goal in the designated minute, everyone in that section would win free Dr. Pepper. The Stars didn't, in fact, score a goal during that minute, but they pulled out a win. I'll take a W over free Dr. Pepper, thank you very much.

The second thing that happened was that DD ended up on the jumbo-tron. Mostly the cameramen move around the lower bowl and our usual seats are in the upper bowl. But tonight we got found. We just smiled and waved and the guy moved on. It was kind of exciting for as much as I had been dreading it.

While my 100 Things Give Away has sputtered a bit in the execution, my binge-watch of Maria Kondo and her take on keeping things has spawned a shift in thinking for me in regards to the things I think about buying. Many times in the past few weeks, I've opted to not buy something. Mostly it's been Stars related merch, because you really only need so much. And I went a little crazy at Christmas. But the thought process is not limited just to over-priced fangirl purchases.

Last night, I needed to get out of the house and DD needed to go to Dollar Tree. So I tagged along. We ended up on a jaunt through Target as well. While I didn't leave empty handed, the things I bought were a birthday present, a new shower curtain liner, another pair of magnifying readers (because, like Chapstick, you need a pair in all crucial locations), and a treat I promised a friend. I did come across things I could have used or wanted, but had that second and third thought of "Do I really need this?" or "Do I need to spend money on this right now?"

So while, I'm not getting rid of stuff, I'm not accumulating much either. I will get back to purging soon.

Have a great rest of your week.