DD and I watched Outlaw King this weekend. From Wikipedia: Outlaw King is a 2018 historical action drama film about Robert the Bruce, the 14th-century Scottish king who launched a guerilla war against the larger English army. 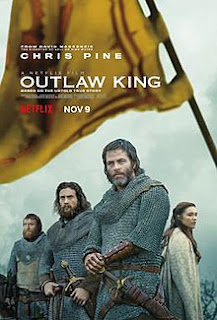 I do like history and I like Scottish history, but I opted to watch it because Robert the Bruce is played by Chris Pine of the Star Trek reboot fame, which as you know, I love. The reboots, that is, more than Chris Pine, but here we are. Also I'm planning a series for Medieval Scotland at some point, so that was also motivation.

I enjoyed the movie, but I warn you it's not for the faint of heart, there's a lot of graphic violence. And for good reason. I mean--it's the Middle Ages and it's men fighting for what's theirs against huge odds.

I give the film a movie rating of nine.

If you've seen it, what did you think?