What's a fan supposed to think...?

Last weekend news broke that Nate Schmidt, defenseman for the Vegas Golden Knights, has been suspended for the first 20 games of the hockey season for violating policy on performance enhancing drugs.

Of course, you never want to see this kind of story, but when it's about a player you really like--whose jersey is the first-ever authentic sports jersey you've ever owned and bought for yourself--it's a blow. You think, "no way, not this guy." 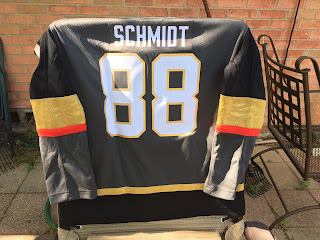 Even once you've read all the articles and you hear arguments from both sides, it's still hard to know what the truth really is.

Based on the little I've read on the NHL's testing policy (very sparse), it stands to reason that we don't hear about hockey players testing positive for anything. But are there really no NHL players using any kind of drugs? There are between 700 and 1000 players in the league at any given time. The whole thing begs a few questions... Why this guy? Why now? Why a player who appears to be well-liked across the board?

This just makes me really sad.