That's a phrase that might be familiar to John Denver fans...and one you can't help having when faced with the amazing beauty of the Rocky Mountains.

I've been in Denver since last Wednesday for a reader/writer conference--there will be more about that later--but I had a chance to sight see yesterday, and how could I not take it, because who knows when I'll make it back here. So!!

My first foray out was actually on Thursday evening when I was able to attend a Colorado Avalanche game, because, well, hockey, so yeah. It was a fun time even though the home team did end up losing.

But yesterday...first stop the Red Rocks Amphitheater which is about ten miles west of Denver proper. Some very notable greats have played in concert here, including Ella Fitzgerald, the Beatles, and David Bowie. 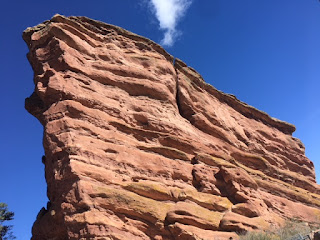 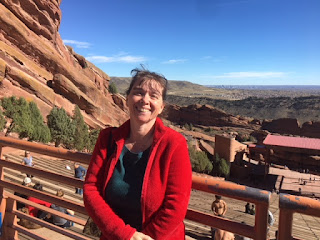 The amphitheater is just there below where I'm standing and there were a lot of folks in exercise attire jogging back and forth or going up and down the stepped seating. A dog barked from way down at stage level and as you can imagine the acoustics were amazing.

Next stop was Boulder's Pearl Street Mall...several blocks of indie shops and restaurants. My companions and I walked it and enjoyed a fantastic lunch and conversation along the way. 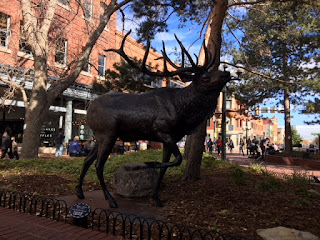 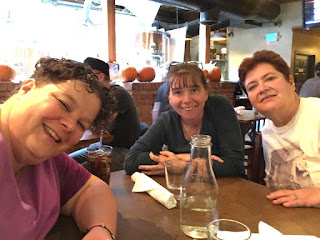 Patrice (in white), Nora (in purple), and myself at an indie brewery and restaurant.

After that, we trekked out to the Flatirons and hiked up to a small summit at around 7K feet and had the most spectacular view of the Rockies. 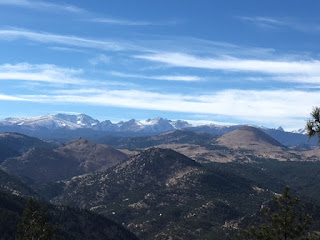 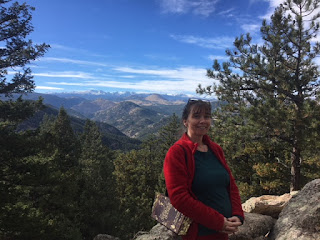 There was snow in the last couple of weeks so the higher peaks had snow. So so gorgeous!!