So I went to a funeral yesterday...


It wasn't for a person I knew well. I attended out of respect for my father-in-law as it was a member of his family. I did get to spend some time with my mother-in-law, which was nice and which I don't do often enough (so maybe an item for next year's goal list, eh?).

Anyway, the point of today's post is--I know what kind of funeral I don't want. That's not to say yesterday's service wasn't lovely, because it was. If it reflected the person it was for, then great. But a service like that wouldn't reflect me.

So I got to thinking...do I need to sorta-kinda plan my own funeral? Leave a package of notes as to what I want, even though, as my mother-in-law pointed out, funerals are for the living, for those left behind, and not for the person who died?

I'd like to think my kids would be pretty sad if/when I die--I mean, I was sad when my dad died, and I was there when choices as to caskets and music and stuff were being made, but I didn't know my dad that well anymore-- We'd lived so far apart for so many years. --and while I wasn't so overcome emotionally at that point, I didn't know what he would have liked. 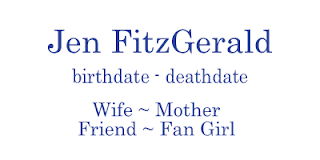 My kids may or may not know me well enough upon my death. I hope they do, of course, but they may not. Or they may be so emotional that it'd be hard to think past how they're feeling right at that moment...

So maybe some general notes and a letter to each of my kids. That sounds like a good place to start.


Happy Friday!! Hope you have a great weekend.

P.S. ~ Please don't take this as me being morbid. The fact is, we're all going to die. Making the process easier on the people I leave behind isn't a bad thing.