Okay, well the Stars actually lost, but the adventure was a win. Last night, DD and I went to a Dallas Stars hockey game. DD had gone last year, but it was a first for me. Oh, man, oh, man!!! 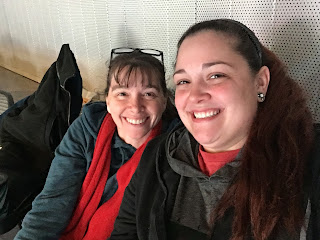 My beautiful girl and me!!!

First, we took the Trinity Railway Express across the Metroplex--turns out there's a station right across the street from the American Airlines Center--which--no driving in traffic during rush hour in Dallas to attend the game. The downside was that we had to leave before the game was over to make sure we caught the last train back to our neck of the woods. 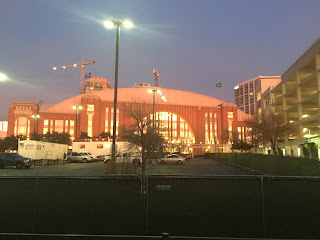 The AAC from the train station.

The facility was gorgeous, I must say. Our first stop once inside the building though? The Hangar--the Stars (and Mavericks) Fan Shop. I couldn't go to a game and not get some merch! 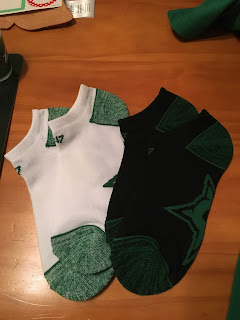 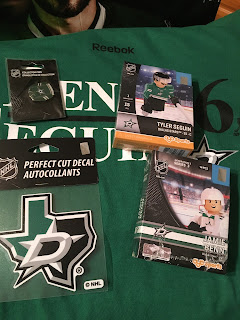 So...socks, a collector pin, a decal, Stars-brand "Lego" players Tyler Seguin and Jamie Benn, and a tee shirt... Tyler's "Lego" face even has his facial hair! 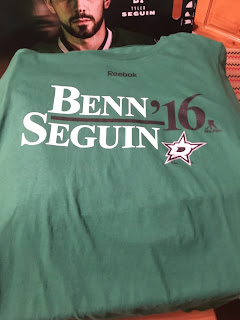 Our view from the cheap seats... 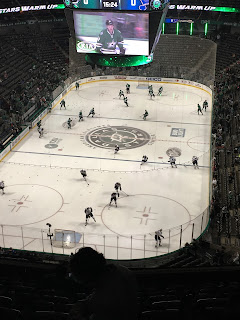 The Stars and the St. Louis Blues during warm-ups.

It looks farther away in the picture than it does when you're there. And I was pleasantly surprised. I could see the whole rink and follow the puck pretty easily. We were at the top with no one behind us, so that was a bonus too. We got lucky that there was no one in front of us either, so we could put our feet up on the seats in front of us.

The most interesting thing to me was there it was quiet, relatively speaking. I'm so used to watching on TV with the sound of commentators and the noises from the ice due to the cameras being down at ice-level. But at a game...no play by play. There's the announcement of penalties and of course the crowd in general and semi-muted sounds from the ice, but otherwise, it's quiet.

A very cool experience and one I hope to repeat soon and as often as possible.

Are you hockey fan?