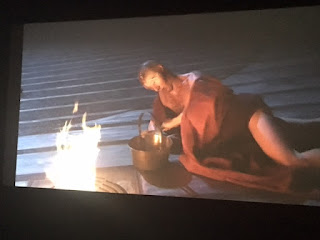 The Creature discovering its world.

If I'm not mistaken, that's a line from the original movie Frankenstein. Last night, I saw the fourth encore screening of National Theater Live's 2011 production of Frankenstein starring Benedict Cumberbatch and Johnny Lee Miller, alternating performances as the Doctor and the Creature. I found myself amazed by Cumberbatch's performance as the Creature. I wasn't sure whose I was going to get, but now that I've seen the performance, I'm glad this is the version chosen for filming.

The story of Frankenstein is a story that is apparently always relevant and can be applied to many hot topics vexing society since it was written. I won't get into the philosophy of it all, mostly because I don't have the mind for that, but YES. Towards the end, the Creature tells Frankenstein's wife (I'm paraphrasing): "Just because I'm different, doesn't meant I don't want to be accepted, want to be loved." 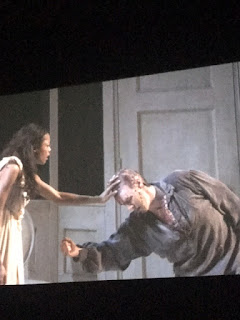 Frankenstein's wife is the first person since the blind man to show the creature compassion. 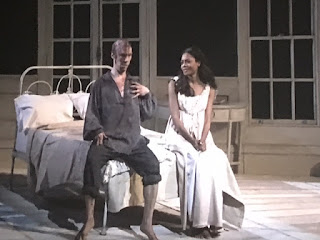 Even though this was performed in London in 2011, I found it rather sobering that the Creature says that once he joined society, he learned to hate and to lie. Huh.


Okay, enough of that. It's no secret that I'm a huge fan of Benedict Cumberbatch. It all started in early spring of 2014 when my daughter happened to be watching an episode of the BBC's Sherlock. And that was all she wrote. Everything I've seen him do has blown me away. I think he's already being looked upon as the Richard Burton or Laurence Olivier of our time. One of the all time greats.

If you get a chance to see him in a stage performance, DO IT.