I knew I might have spoken too soon. It turns out the counselor's office was closed Monday and Sonshine was unable to get his transfer. He did man up and go talk with his directors and they (of course) tried to convince him to remain in band. As of Monday evening he was still on the fence, but I knew he was wavering.

Last evening after I picked him from practice, he told me he was staying in the band. Some of it was apparently realizing that what some of things the band directors said was true, but I honestly believe mostly it's because he loves being in band that much, that he wasn't really ready and fed up enough to walk away.

One thing the directors did say was that if no one tells them there's a problem, they can't address it. And Sonshine gets like me where it festers and he talks to everyone but the person or people who really need to hear it. So I think I need to step up and go to the band director with my concerns as well.

So the end of an era is not the end at all. 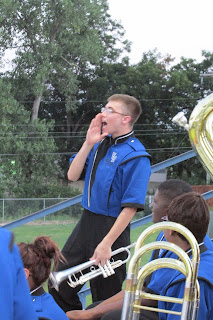 Let's see how it goes. Luckily, though, this week is a bye week and a much-needed break.

Sounds like Sonshine is handling this like a man - with careful consideration of all the pros and cons. Good for him.

Glad to hear he spoke with the directors, and heard their point--if you don't speak up, people won't know what's wrong. Hopefully things will improve now that he's talked to them!