As most of you know, I write fan fiction. I love to read well written fic and I love to write it. Several years ago, while heavily involved in the BBC's Robin Hood fandom, I tried something I'd never done before. Something I was nervous about, but bound and determined to see through to the very end.

I know you're wondering what this thing is. Well, this thing is the act of posting chapters/parts/episodes of your story as you write it, rather than waiting until the whole thing is complete. I'd been the victim, more than once, of other fic writers who go great guns, writing and posting, writing and posting, and then blam, they drop off the face of the earth and you never know the outcome of the story. It's very frustrating, and I never wanted to be THAT fic writer.

So it was after much consideration and still a fair amount of trepidation that I decided to give it a try. The first handful of chapters were posted haphazardly with weeks and sometimes a month between them. I finally developed a routine and never went more than two weeks between posts. 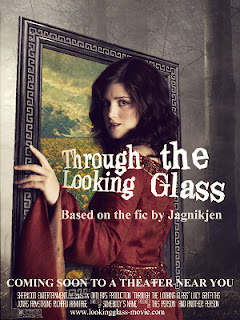 As part of fandom activities, we had all kinds of contest--one was to make a movie poster based on favorite fan fics. My fic was chosen by two of my fandom mates. This was one.


Between October 29, 2009 and March 3, 2011, I posted thirty-seven chapters, a bonus chapter, and an epilogue; I juggled three intertwined plot threads; and wrote a whopping 88K+ words on that story alone, chapter by chapter, week by week. The writing of this story was my haven and escape from the world--see, my dad died right before Thanksgiving of 2009 and we buried him the Saturday after. I grieved for well over a year. 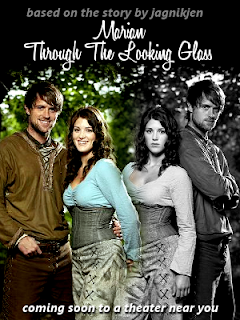 
I must admit I was tired at the end and really struggled to complete the story for folks who'd been following the saga. But I did it and experienced quite the feeling of accomplishment for doing so. The experiment was a success.

And now you're probably asking what the point of that tale is...

Well, the point is, I've been wanting to write a serialized story for my blog. One of my CPs is doing it (yes, at my suggestion) and many other authors do it as well. I started one and had been posting it to an alternate blog when I was planning on using a pen name.

I'm just concerned--partly for the same things. Can I write the story to its conclusion? Can I write enough to post on a regular basis? But my biggest worry--which feeds both the others--is: can I come up with a sustainable plot line. That's my biggest weakness and why it seems easier for me to write fan fiction than original fiction. Not that I can't write, 'cause when I have the details, I can bang out words like nobody's business.


And it's really strange because all I started with on the above story were two elements: a portal to an alternate reality and the fact that the heroine (Marian) would end up pregnant in one of the alternate realities. With those two pieces of information, I was off and running.

It seems like the more I learn about writing the harder it becomes. Too many do's and dont's and don't forget's and make sure's. Ugh.I guess I'll ponder the whole thing some more and try to brainstorm an idea.

Sounds interesting. Looking forward to seeing where you go with it.

As an ex fan fic writer, I remember how wonderful the immediate feedback from readers was. Critiques and contests and workshops are wonderful (and heaven knows I need them and learn from them) but I learned so much from fan fic readers about what kept them reading. One of the best things about fan fic is there are few, if any, gatekeepers. The work goes straight from writer to reader. It'll be fun to see where you go with this.

I'd love to see you try this!

As to posting an on-going story, I understand your trepidation. I have two unfinished stories still on ff.net. I feel bad, but the muse is elsewhere and life is insane lately. I would love to see you do this, though. Would they be fan fiction stories or short stories or what?