Christmas is just a week away...


Sorry for the very late post today, but Sonshine didn't have early practice which meant I was late getting to the office. Then everyone seemed to have some sort of issue this morning. Ugh. Don't you all know it's the last few days before Christmas?? You all should be out shopping and partying, not working and bothering me. Not to mention, because I don't have the right player on my PC, I had to upload all the videos I took last night to YouTube before I could listen to them and choose the one I liked best.

And I still have too much to do for my own personal comfort. I have to get to big WalMart (yes, that's the Texas in me coming out)(but at least I don't put an S on the end as a dear family member of mine does) and Target and Lowe's for a few more things for Sonshine and DD.

Stockings were test stuffed last night and DD and I determined Sonshine's stocking needed a bit more filler, so we did that last night after we dropped him off at the middle school and before the Christmas concert started.

And now let's get to the Countdown... 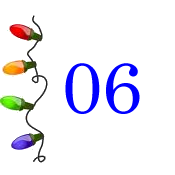 For the last six years, school band concerts have been a part of our run up to Christmas. Sonshine took up the trumpet in middle school and has played a handful of instruments since. Last night was the Christmas concert. Now for some reason I have to sit through middle school bands again because the HS band director thought it was a good idea to combine the dang things. I know she does it for recruiting purposes, but you know what? I did my time listening to a beginner band mangling Christmas songs. :(

Today we're going to combine our countdown and our Christmas song because it's just logical to do so. So here's Sonshine's school band. I'm giving you two songs though, because I can and because you may not really want to listen to the second one.

Now this second one is rather long because the kids were each allowed to take a turn to do a little improv. So if you're inclined to sit through all 6:53 minutes, knock yourself out. Sonshine does improv otherwise I wouldn't have bothered sharing. After Sonshine though (about the 3 min mark), you can probably stop watching as the bass player gets an extraordinary long chance and then it's just boring.

Do you have kids who play instruments? Or maybe siblings? If so, how many Christmas concerts have you sat through?

My brother played the alto saxophone, starting in junior high. I've sat through my share of concerts, holiday or otherwise! :)