It's Friday again, which should be a good thing, right? Mostly it is, but this time of year with a high schooler in football, cheer, drill team, or marching band means crazy busy.

So tomorrow, Marching Band Boy and I, along with the band director and approximately 20 other students (not the whole band) will be going to The Battle of the Bands. It was supposed to have been an all day thing, but we've been given a reprieve. We don't have to stay ALL day. 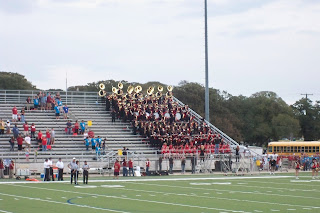 We played Saginaw HS last night. As hectic as it is dealing with 50 or so band kids, I can't imagine having a band 230 kids strong.... And that's just the band--that empty section just to the left later sat probably 100 drill team members!

October 6 is pre-UIL, the 8th is another district contest, and the 20th is actual UIL. Throw in weekly football games and Cowboy Stadium events and, well, you can see it's a busy month. If you have more than one child in extra-curricular activities, bless your heart. I'm lucky I only have the one.

On top of all that, there's just REAL LIFE: work, housekeeping, family, sleeping.

I'm pretty tuckered right now, but I'm going to keep on keeping on. This is a special time in my son's life and I'm lucky and happy to be a part of it, despite the crazy.

I had something else to posit about, but tired as I am I've forgotten what it was...something about blogging or writing or I don't even know...

On another note, this past Wednesday was official weigh-in day. I achieved my goal of 2lbs. in 2wks., exceeded it even. In addition to that, I reached another milestone--getting under the 150lb. mark. The official number was 149.7. So the next two-week cycle begins!


Big weekend plans??? What are YOU going to be up to?

Re: band. I remember those days from marching colorguard. Crazy, but fun.

Have a good weekend!

Just reading your post makes me tired... I remember those days quite well when I had 2 in high school. We had some fun times, but I'm glad they're over! :)

Have fun & get some rest.