I interrupt the Tuesday no-blog rule to announce:


I have completed A Snowball's Chance in Texas!

BFF Stacy Miller would never jeopardize her life-long status, even for a guy she’s had a crush on for almost ten years. Especially since that guy was the little brother of said BFF. But when Lieutenant Connor Jackson returns home on leave for a weekend birthday bash, she decides to do what she wants—just once.

Time has taught Connor one thing—he’s never going to find another woman like Stacy. He’s home to prove to her she’ll never find another man who loves her more. Stacy still thinks she needs to put Pilar’s childish demands over her own wants and desires. Connor has seventy-two hours to convince her otherwise.

I'm so excited, I can't even tell you. This accomplishment has been about a decade in the making. No, I haven't been writing that particular story for ten years, but that's how long I've been a member of RWA and NTRWA and honing my skills/craft.

The story itself has been in the works since February of this year, and after a major slashing of words and a lot of smoothing out of the rough edges left by the hacking, it has finally finally been rendered COMPLETE.

And not only is it complete, it has also been submitted electronically to Entangled Publishing. Unfortunately, it could be up to six weeks before I hear something. Of course, it could be sooner. *fingers crossed* Or it could take longer. As soon as I hear something, I'll be sharing, one way or the other.

As a reward for finishing and submitting, I will add the key charm I got back in March that came in a set with a heart-shaped padlock. 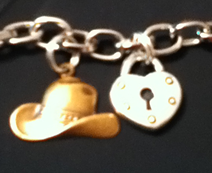 I promised myself I could have it when I finished and submitted. I'll also get an additional charm from my chapter for finishing the book. So pics next month!

Now it's time to get revisions going and done on book two, Children With a Chance of Marriage. This is the story that finaled in a contest and is in front of final round judges as I type.

Now, back to our regularly scheduled day! Talk to you tomorrow!
Posted by Jen FitzGerald at 10:06:00 AM