So Monday night, DH, Sonshine and I went out to eat and to the movies for DH and my 19th anniversary.

I am posting an image of one of the movie posters. I'm guessing the film studio won't mind if I sell a few more tickets. 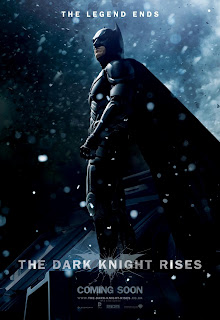 The movie was fantastic. They referenced the first two films of the trilogy and wrapped the whole thing up in a pretty box and a bow. As far as I can tell, this iteration of Batman is over. And I'm glad. Not that I wouldn't like to see Mr. Bale as Batman once more, but Bruce deserved some happiness, and he finally got it.

I watched my fair share of the Super Friends back in the 70s and 80s, but I was never really drawn to the comic book super heroes. So I'm not sure how I ended up watching the first film, Batman Begins, but I'm glad I did. Christian Bale did a great job of making Batman human. I realize his alter ego, Bruce Wayne *is* human with no special powers derived from spider bites, nor did he land on earth from another planet, and that Batman is just the man playing dress up. But whether as Bruce Wayne or Batman, Christian Bale infused the character with empathy, fallibility, and vulnerability.