Yesterday was a perfect day. Baby boy spent the night at a friend's house and wasn't home, DD went to church, hubby spent the night at his mom's house. I was alone. A cold front moved in Saturday leaving our neck of the woods much, much cooler that it had been. The morning was cloudy, slightly humid, but cool. I opened all the windows and enjoyed fresh air and the sounds of nature.

And I wrote. Actually, I did quite a bit of editing/revising. In between bouts of writing, I cleaned house and did laundry. So I was doubly productive. I love days like that.

Then around 1pm-ish, the clouds dissipated and the sun came out. The moisture in the air went away and it was a beautiful, gorgeous afternoon. I should have gone outside to enjoy it, but I can't see my laptop screen and I was on a roll and had a goal to meet, so I opted to stay inside and keep on trucking. I met the goal and then some, partially making up for some of the previous days' word counts I missed. But I'm still a bit behind.
Posted by Jen FitzGerald at 8:59:00 AM 2 comments:

High school football game tonight--not that I watch the game. I usually sit with my back to the field and watch the band. These kids are energetic and a lot of fun. That's not to say they aren't kids and don't mess around when they aren't supposed to, but they *are* teenagers. Very few seniors are in the band this year--which explains why my freshman son is first trumpet. (not that he's not talented, but it is unusual)

I've been put in un-official charge of game-night snacks. The band members aren't allowed to visit the concession stands any longer as they wear their official marching uniform to the games and the district does not want them staining them. So right after half-time, my DD and I are set up to hand out pre-packaged cookies and chips or rice crispie treats, etc. and a soda and a water to each kiddo.

Also, they now have to be fed prior to them leaving school for the game (our home field is a mile away and shared by several other schools)--an additional task that got dumped on the band director's already over-burdened shoulders. Next week, our family will be providing dinner for the band. Oh, boy.

Well, here's a shot of my handsome boy: 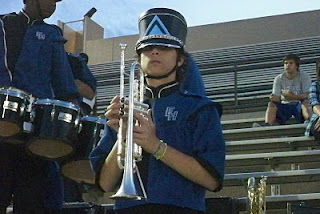 and the band playing the Star Spangled Banner:

I got sucked into a new TV show and am halfway through available episodes. (The fifth and final season begins in late October.)

Friday Night Lights was recommended to me by a friend and I finally decided to give it a try. Based on the movie and book of the same name, the show is compelling drama. At least to me. I don't think it's everyone's cup of tea, although it has won many awards and the actors who play the coach and his wife were nominated as best leading actor/actress.

It centers around the high school football team of a fictional west Texas town. The coach and his family serve as the central focal point, but the show also spends a lot of time following a handful of players and their lives/loves/family life. Not every character has a story in every episode although he or she may be seen as part of others' story lines. But I almost never realize a character is missing, 'cause what's onscreen is pretty riveting.

My biggest gripe is dropped plot lines. There are several times I've wondered, "Hey, what happened to so-and-so?"

What's your favorite compelling TV show?
Posted by Jen FitzGerald at 10:53:00 AM 5 comments:

A lot of angst mostly. Work related, of course. But that's not fun writing or reading so...

New TV obsession: Stargate: Atlantis. Hubby started watching this show several weeks ago; my watching was hit or miss. And then all of a sudden it was more hit than miss and Major John Sheppard played by Joe Flanigan started to grow on me. So I have started watching from the beginning.

Ongoing TV obsession: The BBC's Robin Hood and Jonas Armstrong. This fandom is my escape and fun. I play there with fellow fen and have made some nice online connections.

What keeps me busy: aside from work, I keep busy with my trumpet playing, band marching son. Going to his events and finding great enjoyment in listening to the band play. There are several talented kids and it's such a joy to listen to them play. Plus I help out the band director when I can, which seems very little. She's on her own this year and having to carry the program almost exclusively on her own shoulders, bless her heart. I wish I could do more, but since I do have to work, I just can't.

When I'm not being a band groupie or wife or mother, I write. For fun and not so much profit, at least not monetary. But writing is my creative outlet (which has taken many forms over the years) and it has brought many wonderful relationships my way. Some are now over, but many continue and no longer depend on the thing that brought us together in the first place.

What're your creative outlets?
Posted by Jen FitzGerald at 7:47:00 AM 2 comments:

Well, not so much late as behind. I'm about 5000 words in the hole, and the days in which to make them up and reach my goal in full are dwindling. Tonight, though hubby may be visiting his mother, will find me at the high school football game watching my boyo play/march during half-time instead of at home banging out words. A mixed blessing. I'm looking forward to seeing boyo officially play, but I would really love to have the house to myself. Ah well...

And tomorrow is filling up fast, too--boyo has to march/play in a parade. Before he's due at school at 10am, he needs a haircut. Bad. And before that will probably be a trip to the Super WalMart for the new xBox game he's been asking for (in lieu of all the allowances I owe him). My day is looking to start at 8am. Argh... I may just have to get up at five or five-thirty in order to get some extra writing time in. Usually, I sleep in till six on Saturdays and Sundays.

But at least I'm writing...right?

Tropical Depression Hermine as wrought havoc up and down my state, at least in rainfall, if not in other ways. It has been raining since yesterday mid-morning pretty much without ceasing. There was a lull around two pm yesterday afternoon when I walked to the post office, but it was actually still raining. There were a handful of tornado watches and a few tornado warning last evening (and that's just in the DFW area). And, as you can guess, with the amount of rain and the speed in which it is falling, there are flash flood warnings and watches up and down the state as well.

Our office was shut down this morning for about an hour and a half as we discovered water in our fuse box! We called the business park for someone to take a look and they basically said we were okay now that the water was drained but that they couldn't really do anything until the rain stopped and everything dried out. Great; so in the mean time, we just hope the electricity doesn't arc and fry the building.

Email ThisBlogThis!Share to TwitterShare to FacebookShare to Pinterest
Labels: rain

How about those Cowboys?

The Dallas Cowboys, that is.

Last night I worked a concession stand at the brand-spankin'-new Dallas Cowboys Stadium in Arlington, Texas.

First let me say, thank goodness they move to Arlington! The new stadium is a hop, skip and jump down the highway from my house. A blessing indeed at 11PM when you are utterly exhausted. We arrived at 2PMish to get the stand set up. It's not really a stand, per se, but most of you have been to professional sports venues--yeah, we were in the one of those beer, burger, hot dog selling stands built into the facility.

That was an experience and I'm still too exhausted/sore to gather my thoughts about it at the moment.

But in case you were wondering why I was there...working the stand on behalf of the band boosters for my son's band. The contract with the Dallas Cowboys is their main source of income each year.

Anyhow, it was just an exhibition game,but the Cowboys won against the Dolphins.

And since my efforts were in support on my son--who, by the way, was chosen "Bandsman of the Week" at the game he attended/marched at last night. It was announced over the P.A., too... *big momma grin* I wish I could have been there for that!--here is the video of his band playing a part of their competition program as promised.

Last night hubby, DD (that's darling daughter, remember) and I went to see sonshine in his first marching performance. It was just for family to show us what they've been doing and what they've learned. I did take my camera and I do have pics and video, but (alas) I left the camera cable at home. So video will have to wait until tomorrow. (Sorry, Mom.)

His first real public performance is Thursday at a football game in Dallas. And I have to miss it. Hubby said he would go to show familial support. And where will I be you ask????

DD and I (and others) will be at the brand new Dallas Cowboys stadium dishing up hot dogs and cold beer on behalf of the band. Our band booster has a contract with the franchise and this is how they earn the bulk of their annual operating capital--somewhere around $15K to $17K. And if we work the Super Bowl in February, that'll be another $2K just for one event. Holy marching bands, Batman!